Insurers hovering over the use of drones

A community often looks like a war zone following a disaster such as a tornado, flood or earthquake. Ironically, military technology looks to be the future of recovery. 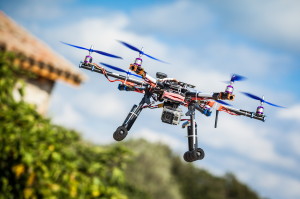 The insurance industry is considering using drones to assess damages and speed up the claims process . Rather than waiting for claims adjusters to arrive at a damaged area, drones could be programmed to survey, evaluate and transmit essential information to the adjusters in a matter of hours. That means adjusters will be able to process more claims faster and you’ll be back in business sooner.

The added bonus is that adjusters’ safety won’t be at risk if they aren’t on the scene. Drones can fly over the entire scene documenting damages to the entire property. No need to climb up on roofs, drive through flooded areas, or avoid falling limbs or downed power lines.

Drones already in use

Drones are already used in the U.S. in the areas of public safety, agriculture, and the environment and to monitor weather conditions and disasters, according to the Association of Unmanned Vehicle Systems International. AUVSI wants the FAA to revise regulations, lobbying to have air space designated for unmanned vehicles, which would increase the use of government and commercial drones.

Other countries use drones in law enforcement and monitoring weather and disasters.

Whether or not a company can currently operate drones for business up for debate. FAA approval isn’t required for model aircrafts that fly at altitudes of under 400 feet. However,the counter argument is that model aircraft are being flown for business purposes.

Another concern is privacy. Or is it?. Some in the insurance industry say the privacy issue was settled by the commercial aircraft industry. Small aircraft and helicopters often fly over neighborhoods. The Supreme Court has upheld rulings that in those instances there is no reasonable expectation of privacy.

Adjusters need not fear for their jobs. It’s not reasonable to think that drones will fly out to every car accident, homeowner claim, or business break-in. But for catastrophic, large-scale claims, the use of drones offers great potential.