6 Untrue Myths You Heard about Contractors Insurance from Your Friends

Below are common myths that can cost builders money and accurate information to help you make money-saving choices for your business.

Myth #1: Transfer Assets to Your Wife and Don’t Worry about Insurance

“I don’t need to spend all that money carrying Workers’ Compensation and General Liability Insurance. I’ll transfer all my assets over to my wife and if I get sued, I’ll just stop working and lay low for a while until it blows over.”

This strategy might seem to work in the short run, but eventually something will go wrong. In the meantime, every time such a contractor builds wealth and acquires assets he has to worry about losing it all in an uncovered lawsuit. And what about the risk of losing the transferred assets in a divorce?

Today’s more sophisticated and better educated project owners and homeowners don’t want to trust their biggest investment with a short-term journeyman contractor. Besides, general contractors require these coverages or else they will make a deduction from the sub.

“I’m not required to carry Workers’ Compensation under state law because I don’t have four or more employees.”

This statement about four or more employees (or three or more in some states) is much more complicated than it first appears. Case law resulting from lawsuits and administrative hearings has altered the true meaning of the rule. The actual rule can be summarized as you must carry Workers’ Compensation if you use four or more employees (including employees of your subcontractors) during a one-year time period.

So what happens if you’re required to carry Workers’ Compensation but fail to do so? Quite simply, if an employee or uninsured subcontractor is injured, they can sue you on a direct basis (instead of collecting from your Workers’ Compensation Insurance Company) alleging that your negligence was the cause of their injury. Furthermore, the penalty for not carrying Workers’ Compensation is that you lose your legal right to assert your common law defenses (such as the injured worker’s own negligence was the cause of the injury). What this really means is that you will need to get your checkbook out and write a check for whatever damages they request because you will lose this lawsuit every time. Also, please understand that your General Liability policy does not provide coverage for these types of lawsuits.

Furthermore, attorneys representing the injured party can more easily pierce your corporate veil and get to your personal assets if they can prove that you did not carry a Workers’ Compensation policy contrary to state law. 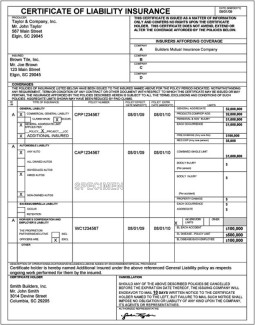 Since you were required to carry Workers’ Compensation under the “4 or more employee or subcontractor’s employees” rule but did not, you will always lose a lawsuit filed by an injured worker. The best way to protect yourself is to purchase a Workers’ Compensation policy for the minimum premium of $750, even if you believe that 100% of your subs have their own coverage.

Myth #4: Excluding the Owner from Workers’ Compensation Is a Good Idea

“I’ll carry a Workers’ Compensation policy, but I’ll exclude myself since I am the sole proprietor, partner, or corporate officer and this will result in a big premium savings since I really don’t need the coverage anyway.”

It’s true that this can be a big money saver since eliminating the owner’s payroll can result in a significant premium reduction. However, it’s a big mistake to think that the benefits of Workers’ Compensation are not needed for the owner. Workers’ Compensation pays for 100% of all medical bills resulting from an on-the-job injury and pays lost wages equal to approximately 66.66%  of the average weekly wage taken by such owner. In addition, certain lump sum payments are made for disability. How will a small contractor support his wife and family if he has no income due to an on-the-job injury? This could mean losing his home, children’s education fund, savings account, boat, etc.

Before an owner ever excludes himself under his own Workers’ Compensation policy he should make sure that the following in is place:

In many cases, the sum of the three above-mentioned policies could be less than the cost of the owner being covered under his own Workers’ Comp policy. However the coverage is usually not as comprehensive as that which is offered by Workers’ Comp. On the other hand, the other policies will provide benefits in the event that the injury results from an off-the-job incident.

Myth #5: I Don’t Have to Deduct from My Uninsured Sub because He Signed an Exemption Form for Workers’ Compensation

“Since my uninsured sub may not be required to carry Workers’ Comp under state law because he has fewer than 4 employees, he can provide an exemption form instead of a certificate of insurance and I don’t have to deduct like I would from an uninsured sub.”

Myth #6: Underestimating Payrolls to Save Money

“When setting up my Workers’ Compensation and General Liability policies, I’ll intentionally underestimate my projected payrolls and amounts paid to uninsured subcontractors to lower my premiums. Once the insurance company audits my books at the end of the year, and the actual payrolls are determined, then I’ll pay the additional premium. No need in paying premiums before I really have to.”

This mindset is extremely dangerous and has resulted in many a good contractor having to shut down his business because of bankruptcy. A large additional premium owed at audit is payable in full (with no financing) within 30 days of the audit billing. This large payment is compounded by the fact that the contractor has just paid his down payment to renew his policies. Furthermore, the new policies will be amended by the insurance company to reflect the higher payroll figures that were revealed by the audit. This triple dose can result in a cash flow nightmare that the contractor can’t afford to pay.